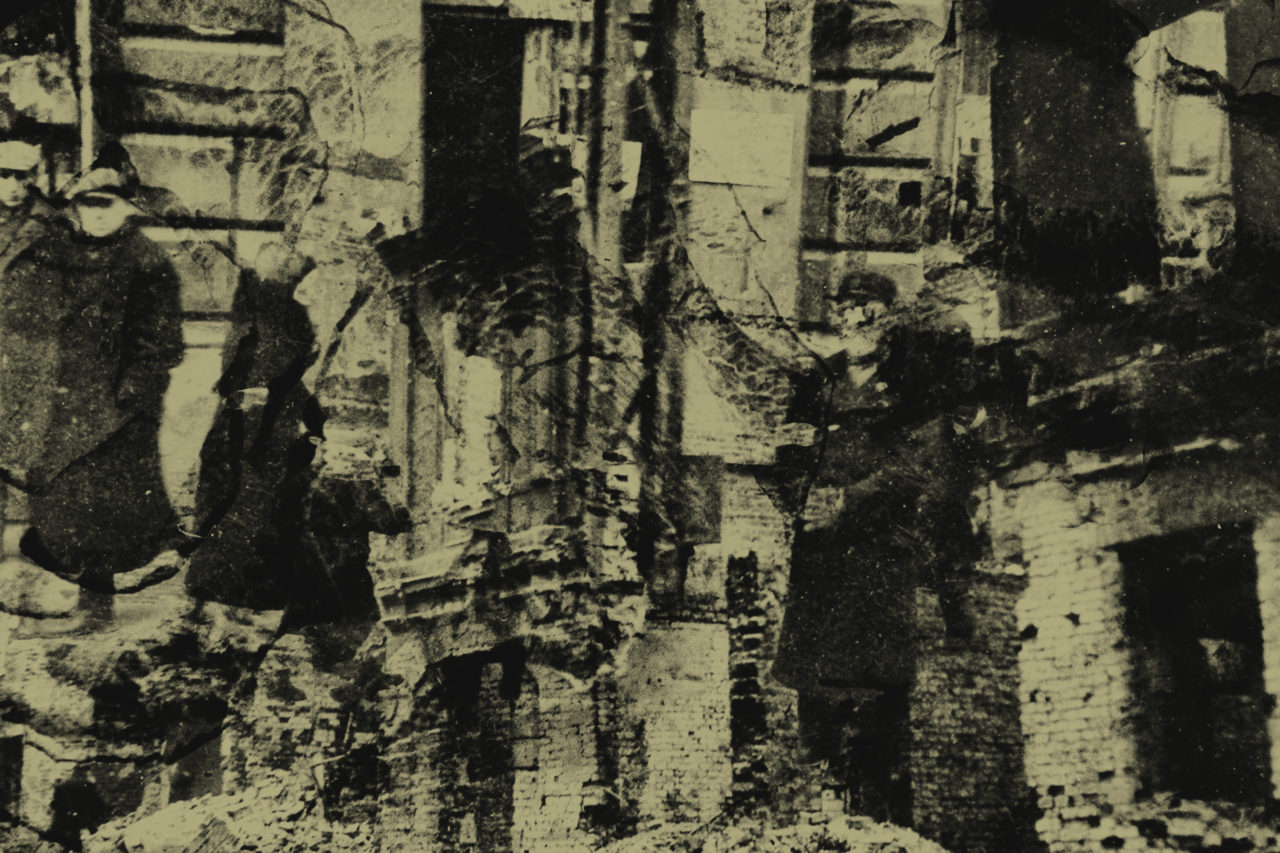 The term “ghetto” has been a well-known and ingrained concept in European culture and history, since Venice’s Jewish quarter – ghetto – was first defined in the 16th century. But in Nazi Germany, the term “ghetto” in the sense of a space where the Jewish population would be concentrated, was not used before 1938. The idea to settle the Jews in Germany in separate quarters was only proposed by Herman Göering after the November 1938 pogrom (Kristallnacht). At the time, the head of the Reich Security Service (SD), Reinhard Heydrich, opposed the idea, arguing that the concentration of Jews in major cities would result in hotbeds of poverty and disease. Subsequently, the Jewish ghetto came to be identified by the Nazi leadership with diseases and poor sanitation. This was a part of the stereotypical and antisemitic image of the Jewish way of life.

What is this image based on? After all, German Jews were well integrated into German society from the 19th century, and crowded and poverty-stricken Jewish quarters characterized Jewish life in Eastern Europe, but not in Germany. One answer is that Germans were well aware of the Jewish lifestyle in Eastern Europe. Indeed, accounts of Jewish life written by German soldiers who entered Poland during the First World War were published in Germany years before. These accounts described the shock and repugnance German soldiers felt when they encountered the poverty, misery, and meager living conditions that prevailed in the Jewish neighborhoods in Poland and Lithuania. Likewise, a book published in Germany in 1938 by the Nazi journalist and historian Peter-Heinz Seraphim detailed these characteristics of Jewish life in Eastern Europe. The need to solve the problem of Jewish quarters – already dubbed “ghettos” – was thus central to Nazi Germany’s perception of Eastern Europe. This explains why even before the German occupation of Poland in 1939, “ghetto” was already a commonplace term in Nazi discourse, symbolizing degeneration, economic disadvantage and parasitism, and extreme sanitary danger. This worldview was prevalent among the Nazi leadership in the 1930s long before the first German soldier even set foot on Polish soil.

From the Nazi standpoint, Poland was an ideal location from which to experiment with establishing a German living space (Lebensraum) in Eastern Europe. While separate Jewish quarters were not an entirely foreign notion to Nazi thought before 1939, there was no early decision or plan to establish ghettos for Jews in occupied Poland. The foundations of the Jewish policy in occupied Poland were laid out in Heydrich’s infamous Schnellbrief on September 21, 1939. The new guidelines’ main element was the establishment of Judenrats, namely, Jewish councils that will take over the organization of Jewish life under German rule. Although the Schnellbrief mentioned the “ghetto,” this was a reference to the traditional Jewish quarter that existed for many generations in almost every city in Poland. According to this plan, Jews were to be concentrated, as much as possible, in existing Jewish quarters named “ghettos”. There was no intention at the time to create additional isolated and closed residential areas for Jews in Poland. In other words, the SS’s original purpose was not to imprison the Jews, but to cluster and strictly monitor them.

Members of the SS and the security police (SD) who arrived in Poland described the East European Jewish life in “ghettos” with disgust, contempt, and resentment. Thus, upon implementing the policy of concentrating Jews in separate quarters, SS officials broadly interpreted the need to isolate the Jews in order to control a repulsive population that posed health risks to the broader society.
This is the context for the establishment of ghettos in Poland during the first two months of the German occupation. One example was the attempt to concentrate the Jews in Warsaw in several streets within the Jewish residential area on November 4, 1939. Similarly, in early October the Germans issued an order to establish a ghetto in Piotrków Trybunalski. The failed attempts indicate that there was no organized plan of establishing ghettos in Poland during those months. Rather, these were local initiatives that predated the formal process of ghettoization which began in late 1940 and early 1941.

Notwithstanding the early failure to establish a ghetto in Warsaw in October 1939, the plan did not come off the SS’s list. In January 1940, the German occupation administration leaders in Warsaw began meticulously planning the complex urban project of establishing a ghetto in the heart of a city of about one million and three hundred thousand inhabitants, the seventh-largest city in Europe at the time. In a report from January 1941depicting the process of establishing the ghetto in Warsaw, Waldemar Schön, one of the ghetto leading planners, justified the ghetto’s establishment using classic elements of Nazi racial theory. He stated that there was a need to safeguard the general population from the Jewish danger, including the plagues that Jews spread, their insidious economic activity, and the health risks embedded in their way of living.

Establishing the ghetto propelled a process that was not yet fully realized, namely, dismantling the Polish capital’s urban infrastructure and undoing its economic and social viability. Such plans could be found even before the invasion of Poland, but they only came into fruition once the ghetto was established. Like other major cities in Europe on the eve of the war, Warsaw was a metropolis featuring architectural, economic, cultural, and human components that evolved organically, layer by layer, for centuries. With a mixed architecture originating in different periods, a well-developed transportation infrastructure, a range of shops, markets, factories, and cultural and religious centers, Warsaw’s older neighborhoods grew significantly starting in the 17th century, alongside its 19th and early 20th centuries’modern residential areas. The city’s diverse population comprised a range of national and ethnic minorities, including a large Jewish population. After having toured Jewish communities in Eastern Europe in 1929, the French journalist and writer Albert Londres referred to Warsaw in his book Le Juif errant estarrivé (The Wandering Jew Has Arrived) as “the Jewish queen of Europe” and a “metropolis […] of the Jews”. Warsaw’s multiethnic and multicultural social tapestry in 1939, and especially its Jewish dominance, were a significant consideration in the German desire to pummel Warsaw, divide and dismantle its urban center in accordance with Nazi racial ideology.

How significant was the establishment of the ghetto to urban residents’ daily life? As a process of internal ethnic cleansing and resettlement ensued, Jews were forced to leave their places of residence, and work and move to the ghetto’s streets. At the same time, about 150,000 ethnic Poles were forced to relocate in the opposite direction. In a matter of a month, these forced migration waves had dismantled a multicultural urban structure built slowly over many years. While not always living in harmonious neighborly relations, Warsaw’s population’s everyday life was characterized by a diverse and unique fabric of coexistence. The establishment of the ghetto and forced segregation created a divided city and dismantled its organic structure.

Within a short time, Warsaw was mercilessly divided by walls that separated the ghetto from the entire city. This wall had, first of all, a psychological and social effect on both Poles and Jews. All city residences consider the wall as a symbol of their helplessness under the German occupation. When they left their home, many Poles had to change their everyday customs due to the wall. They encountered it while walking in the city that was their home. The wall blocked their freedom of movement preventing them from reaching places they used to visit in the past. It was a soundless, constant proof of the occupier’s ability to do with the hometown of millions as he pleased.

The Jews encountered the ghetto walls differently. It illustrated their complete exclusion from the city that was their home and from belonging to it. The wall created a feeling of a massive prison with no departure date. The wall soon became an impenetrable boundary between the famine, the unbearable housing overcrowding, severe illness and sanitation conditions, and the uncontrollable increase in death rate. The wall was the “gift” the Germans gave to the former Polish capital that created harsh and threatening living conditions for the Jewish citizens of the city whose lives, according to the Nazi ideology, were considered unworthy to live.

This dissolution had many consequences in all areas of life. City transportation lines were divided or discontinued, and urban traffic became cumbersome. Likewise, streets that had previously formed one residential neighborhood were broken up or split with one side of the road located in the ghetto area and the other remaining outside of it. Business partnerships and trade relations between Jews and Poles that had existed for decades were suddenly halted and assets were liquidated. The urban landscape became lifeless.

Warsaw’s soundscape likewise transformed. Streets that were previously characterized by a mixture of languages, with a dominance of Polish and Yiddish, became muted and linguistically segregated. ​​Although many of the Jews in the ghetto spoke Polish, street music in the ghetto was mainly in Yiddish. Outside the ghetto, the sound of Yiddish was replaced mainly with German, the occupier’s language. German was present in the Polish street not only on signs and billboards – detailing new orders and rules – but also in cafes, shops, and areas where German soldiers and officials and their families resided.

The Jewish underground press was well aware of the changes that took place in the Polish capital following the establishment of the ghetto. The Bund’s underground newspaper “Biuletyn” from January 1941 described the impact of the ghetto on the lives of Jews and Poles:

“One stroke of a pen brought about economic destruction to 244,000 people. Within ten days – between October 20 and November 104,000 Jews and 140,000 Christians were forced to move from one place to another. Sixty-one thousand people had to seek shelter, abandon their businesses, leave their customers, and move away from their jobs. The occupier mocked the mass disaster with malice.

The Christians who left their apartments on the ghetto’s streets – shoemakers, carpenters, locksmiths, upholsterers, laundresses, laborers, and clerks – were mostly residing in basements, attics, or single-room units. The masses’ low pennies were spent on transportation fees and key fees for apartment owners. Essential household items were sold, and few had managed to exchange apartments with Jews, albeit illegally. At the time, the streets of the ghetto consisted of roughly 50% single-room apartments, 27% two-room units, and only 20% had three rooms (mostly workshops and warehouses). Thus, Christian “migrants” forced out of the ghetto’s streets faced challenges finding accommodation in the previously Jewish dominant city center where flats were often too large and expensive for the Polish proletariat.

Once bustling with life and traffic, many of Warsaw’s inner-city streets were now deserted and emptied. Workshops on both sides of the wall were closed with the assets liquidated. Goods and raw materials left in the ghetto were hidden and did not reach customers or were confiscated by the Germans. Warsaw’s market has shrunk. The establishment of the ghetto had a devastating effect on areas in Warsaw that supplied vegetables and dairy products. Supply has significantly reduced and is unevenly distributed to the German occupier. The standard of living of broad sections of the population was declining while in the ghetto, masses of Jews were now living in famine. Transportation in the city has shrunk and has become very expensive and harms economic life.

As we see, the ghetto is a catastrophe for thousands of Poles. It is severe destruction for the Jews.”

Daniel Blatman – Chief Historian at the Warsaw Ghetto Museum, Professor at the Max and Rita Haber Department of Modern Jewish History and Holocaust Studies at the Hebrew University of Jerusalem, Head of the Avraham Harman Institute for Contemporary Jewish History, as well as former Head of the Centre for Research on the History and Culture of the Polish Jews at that university. The subject of his research is the history of the Jewish workers’ movement in Eastern Europe, the Holocaust in the Polish lands, as well as the Nazi policies of the Holocaust and genocide in the 20th century.