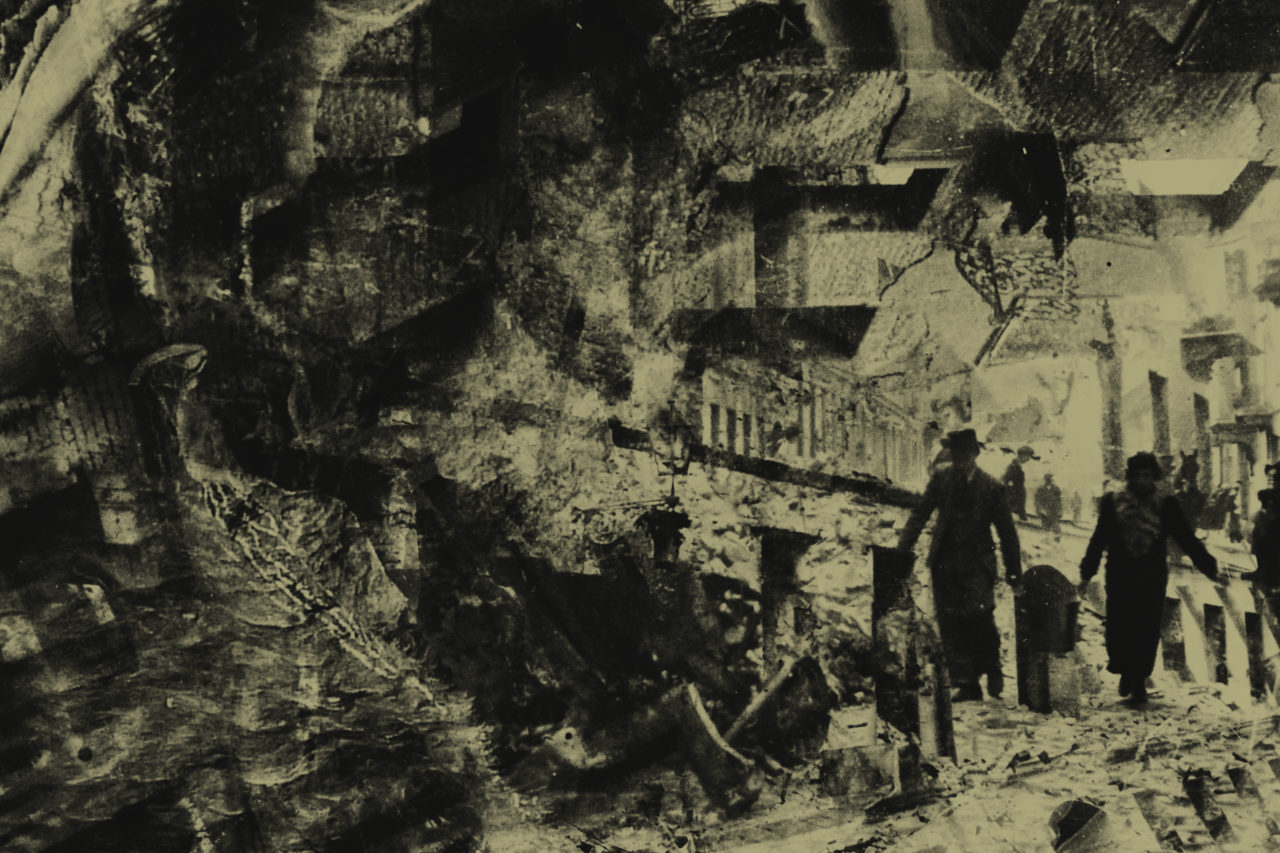 “Walled in alive!”, says the narrator of the greatest Polish novel about the Holocaust, Bread for the Departed by Bogdan Wojdowski. Wojdowski’s work is a true Warsaw ghetto epic, stretching from the spring of 1940, when the construction of the wall started, until 22 July 1942, when the Grossaktion and the gradual liquidation of the “closed quarter” began. The writer made a meticulous sketch of the topography of the “closed quarter”: “One day, in plain view of the people on either side, bricklayers started building a wall along Żelazna and Sienna Streets, on Wielka, across Bagno, along Próżna, Grzybów, and Graniczna Streets, and then across Żelazna Brama Square to Hale, thus closing off the southern district. That was the Little Ghetto. The wall continued down Chłodna to Ptasia, along Przechodnia to Długa, from Mylna to Przejazd, Świetojerska to Ciasna, down Koźla to Przebieg, crossing Pokorna, Stawki, Dzika, and Okopy, enclosing the northern district. That was the Big Ghetto. A wooden bridge was erected across Chłodna Street near St. Karol’s Church to link the two districts, which were separated by a streetcar line.” The wall severed streets in half, the same way it severed families and their lives, or ethnic and identity declarations.

Even though the Warsaw ghetto was not the first of the several hundred ghettos established in the territory of the Second Polish Republic after 1 September 1939, it became emblematic of a world separated by a high wall. The Nazis eagerly spoke of the closed quarter as a form of victim protection – the Jews were supposed to feel safe among their own ilk, free from attacks by their persecutors and anti-Semitism. However, there was a certain, perverse logic to this vision, which I would like to reference at this point: “The wall”, Justyna Kowalska-Leder states, “becomes […] a kind of curtain, behind which the first stage of the Holocaust takes place. […] The wall would have been […] a physical obstacle, preventing direct contact with the reality of the Holocaust, and a partition behind which a genocide was happening, invisible to the Poles.” It becomes a visual symbol of the separation of Poles from their Jewish neighbours, a measure of the difference in the fate of both nations, and one of the reasons the difference was not understood by Polish witnesses. They turned into “half-witnesses” convinced that it wasn’t entirely their business. It is easier to forget things we cannot see. Thus, the wall was a kind of psychological and moral trap set for the witness. It wasn’t until recently that we began to fully grasp its consequences.

The closing of the Warsaw ghetto (16 November 1940) marks the actual beginning of ghettoisation. And for that very reason it is relegated to Jewish history. Meanwhile, it should be one of the most important dates in the history of occupied Poland.

Almost simultaneously with the laying of the first bricks in the wall, writers, sometimes amateurs (as evidenced for example by the collection Tango łez śpiewajcie muzy [Muses, Sing the Tango of Tears]), made efforts to capture and take measure of “the world beyond the wall”. Poetry, prose, journals, scattered notes (frequently unfinished single pages) documented the gradual extermination of the city and protested against the Holocaust.

The place beyond the wall begot great, world-class literature. Among the texts created in the moment, at close quarters with the ongoing apocalypse, we find Czesław Miłosz’s famous Campo di Fiori, Ludwik Hering’s Meta, and the stories of Jerzy Jurandot. However, the greatest consistent chronicler of the ghetto was Władysław Szlengel. The collection What I Read to the Dead is excellent evidence of his stature.

Literature about Warsaw’s closed quarter, and later film, became a source of the topoi organising collective memory. These include THE WALL as a synonym of the ghetto. This topos relates to others, including THAT SIDE/ARYAN SIDE, SMUGGLER/LITTLE SMUGGLER, OLD DOCTOR, JEWISH CHILD, SHMALTSOVNIK, JEWISH COLUMBUSES, CAROUSEL. The topoi themselves, in turn – even though they originated in historical and topographical experience – are found beyond Polish poetry and prose. They have made their way into world Holocaust literature.

Although it may sound cruel, every single one of the topoi mentioned above is situated on the side of life. More precisely, it unveils various forms of existence in a liminal situation. The latter determined the emergence of practices like smuggling. “The Ghetto lived off Warsaw – Warsaw lived off the Ghetto”, we read in Hering’s Meta. Total isolation would have meant the death of the part of the capital in which one third of its residents were imprisoned. To survive, the ARYAN and NON-ARYAN side had to enter into a certain type of difficult symbiosis. This meant smuggling.

Among the loci communes of the Holocaust, one is special. Its uniqueness does not derive from the number of memoiristic, literary or cultural representations. Its significance is tightly bound up with the darkest aspect of extermination. UMSCHLAGPLATZ best defines a place that no longer exists (the space of former place). Like the remaining fragments of the wall which have survived until the present day, Umschlagplatz is a visible sign of something that is already gone but continues to evoke the spirits of the murdered dead.

For several reasons, the Warsaw ghetto is best represented in Polish literature – both in academic studies, memoirs, and literary texts. One of the reasons for this is certainly the size of the city beyond the wall (the largest in Europe), another – its tragic history (marked by deportations, the Grossaktion and the events that began on 19 April 1943).

The fate of the ghetto also filled Polish collective memory. The vision of the closed quarter shaped the consciousness of Polish witnesses in a variety of ways. It left a different picture in the memory of the Aryan citizens who passed through its gates. A blue policeman, a Polish smuggler, a person who entered it “on private business” (visiting a loved one), and someone who had never seen the place and only knew it from stories told by acquaintances all had a different vision of the ghetto. Things were (are) different for the younger generation born after 1989 – people for whom the “time of contempt” is merely a distant past, stories from books, films, the internet.

Contemporary authors, who grew up in Poland after the civilisational and cultural transformation of the 1990s, are writing after the fact. Using various interpretive schemes, they are trying to delve into a reality reduced to ashes, whose traces have been almost entirely erased from the area in which the events unfolded. Jacek Leociak declares: “It’s making emptiness present. The survivor fills it with shreds of fragmentary, mutilated, faded memory. The rest are doomed to project their own assumptions.” Piotr Paziński (Ptasie ulice [Bird Streets]), Igor Ostachowicz (Noc żywych Żydów [The Night of the Living Jews]) or Sylwia Chutnik (Muranoo from the volume W krainie czarów [In Wonderland]) are forced to reconstruct reality – people and events that are no more. However, their aim is not a reconstruction inside the mind of the artist. Something more is at stake – stimulating the imagination of the audience and “imprinting” the old closed quarter into it, a revival that would restore the memory of the spirits of the “unburied” former residents. The purpose of these efforts – combined with various artistic activities taking place directly in the former ghetto area – is to create a symbolic space. A new one, but one deeply anchored in the past, even though still insufficiently exposed and illuminated.

Sławomir Buryła – literary scholar and professor at the Faculty of Polish Studies of the University of Warsaw, researcher of contemporary literature (especially wartime and Holocaust-related). Co-author and editor of the monograph Literatura polska wobec Zagłady (1939-1968) (Polish Literature and the Holocaust 1939-1968) (together with Dorota Krawczyńska and Jacek Leociak). He recently published Rozrachunki z wojną (The War: A Reckoning) (Warsaw 2017) and Wojna i okolice (The War and Its Surroundings) (Warsaw 2018).